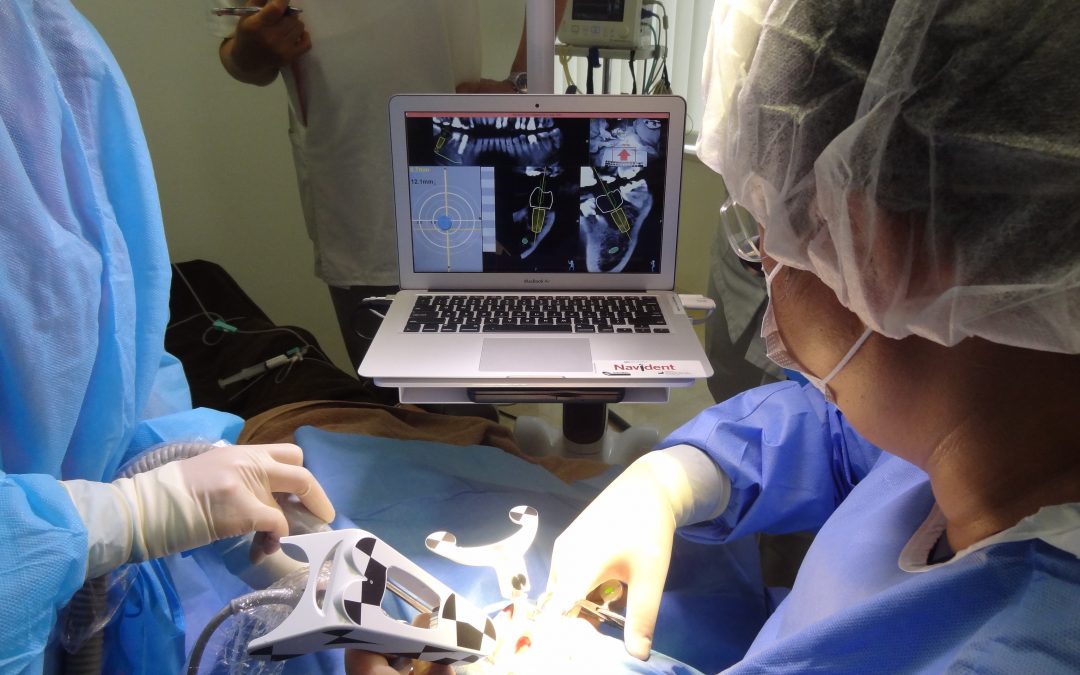 X-ray imaging was discovered by Wilhelm Roentgen in 1895. For the first time, surgeons could see inside a patient without cutting them open. However, these were 2D projections of the anatomy on film. In the 1970s, Sir Hounsfield invented a method to acquire and digitally process X-ray projections from many directions to produce a slice-by-slice 3D representation of the patient’s head anatomy. This new type of device was initially called computerized axial tomography (CAT), and later shortened to CT.

Initially, brain surgeons used CT images to guide needles into specific locations in the head using a mechanical guide in the form of a large metal “stereotaxic frame”, screwed to the patient’s skull. In the late 1980s, four different research groups (at Dartmouth, Aachen, Tokyo and Vanderbilt) concurrently and independently developed prototypes that could register a patient’s head with its CT slice images, then dynamically show the tip of a pointer mapped to its corresponding location in those images.

Shortly after the introduction of the Viewing Wand, other companies introduced similar products, and in the following 5 years, research into the use of surgical navigation systems rapidly expanded to other anatomical regions, including sinuses, jaws, spine, hips and knees. Data obtained by imaging sources other than CT, such as MRI, ultrasound and fluoroscopy, was being used as well.

Initially, this new technology was called “frameless stereotaxy”, implying that its main benefit was the elimination of the need for the cumbersome head frame. However, it quickly became clear that the devices not only improved surgical results by making brain surgery more precise, but also enabled surgery to become much less invasive, reducing patient morbidity and the risks of infections. Exposing tissues in order to see better has become unnecessary, in fact, irresponsible. By the early 2000s, surgical navigation has become standard-of-care in neurosurgery, and was starting to become increasingly popular in sinus and spine surgery.

In 2003-2006, two dedicated dental implantology systems, Robodent and DenX IGI, were introduced to the market. They did not gain widespread use and later disappeared from the market for three main reasons: (1) CBCT systems were not available then to provide dentists high quality CT data at a low radiation dose; (2) at $70-100K, they were too expensive for their market; and (3) the systems were too cumbersome to use and/or fragile for efficient and predictable daily clinical use.

Navident’s development was launched in 2010, as CBCT usage started spreading, largely eliminating the first abovementioned reason. The development team interviewed clinicians and developers who gained experience using the earlier devices and carefully designed the system to address the other two reasons. Using a small laptop, a small stereo camera and a universal handpiece adapter greatly reduced costs. Usability and reliability have been greatly improved with novel design ideas. For example, with its small footprint and convenient positioning of the camera and screen above the patient’s chest, Navident fits much better than previous designs into the dental treatment room. The direct and easy molding of the stent in the patient’s mouth at the clinic eliminated the need for a model and a lab, and greatly shortened the pre-surgical preparation process. Small field CT is easily accommodated. Patient-image registration is automatic and instantaneous, and calibration of the drill tip does not require any additional tools.

If you would like learn more about Navident, sign up here to get your copy of the University of Ghent’s immediate load case study with Navident. It was performed by Dr. Jan D’haese, Dr. Johan Ackhurst and Prof. Dr. Hugo De Bruyn.