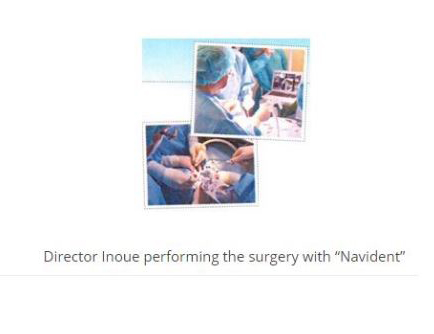 In those days, implant treatment was performed by referring only to the X-ray data of oral cavity. There were some inadequacies regarding the accuracy of surgery, with only superficial information, and without understanding the three-dimensional information like the bone hardness of the patient.

Now, the introduction of CT at private hospitals has progressed, and all information could be digitized. The mainstream is to simulate the status of inserted implant in advance, and to perform the surgery after deciding the thickness and length. There are safe and secure methods, but the minute movement of the drill tip cannot be confirmed with the naked eye during the surgery, and hence it is just the imagination of the mind based on prior information. The limit of “Seems to be correct with this” does not occur by all means. Accordingly, the “Navident” was introduced now. This is the Implant Navigation System developed by a Canadian company. Inoue Dental Clinic has become the first to introduce in Hokkaido, with very few devices introduced in entire Japan.

Advantage due to Navident introduction

The feature of introducing the Navident is the possibility to perform the surgery while confirming the drill movement inside the mouth cavity usually in the monitor. For example, all the movement under the hand can be seen in the monitor before one’s eyes, like inserting the gastro camera. It was possible to deal flexibly while making the course correction, even if unexpected contingency happens, by accurately understanding the detailed information like how much depth the drill has entered the jaw bone?, and how much distance (in mm) is available until the nerve? . The surgery of cases considered as risky area until now has become possible, like the cases involving taking risk in inserting the drill much closer to the nerve. Director Inoue says, “It is necessary to introduce a best performing device at the present condition, to always make a safe and secure treatment to the patient. I think that as my role to involve in the medical treatment”. The patients can surely get further reliable treatment, by increasing the backup based on the state-of-the-art technology, to the technique of Director Inoue who has performed more than 3000 implant surgical achievements until now.